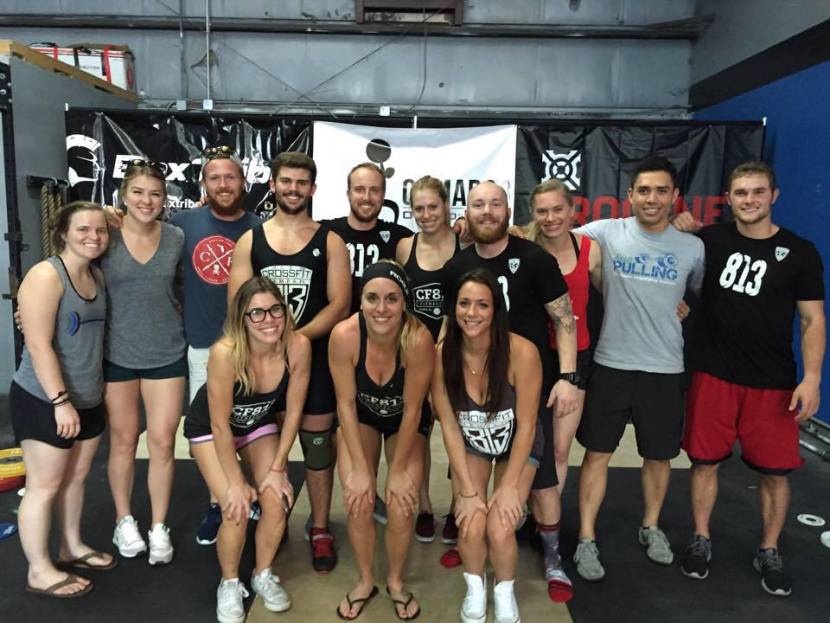 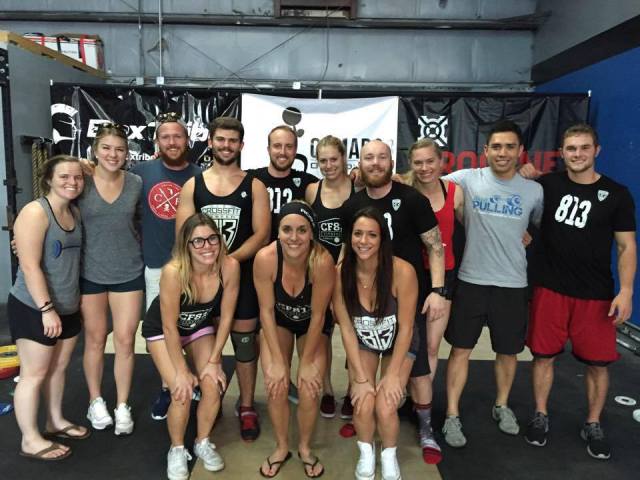 Over the weekend, we took our CrossFit 813 Weightlifting team to compete at the Altamonte Open in Altamonte Springs, FL. The meet was hosted by none other than Danny Camargo at the home gym of his nationally competitive weightlifting team Team Oly Concepts. We took 12 lifters as 2 teams (men and women) who were spread out in sessions that started at 7:00am and ended at 5:00pm on both days. The whole event ran so smoothly and even with 135 competitors, there was zero delay!

The majority of our team has been training the lifts for quite some time but has never done a sanctioned USAW meet, so this was somewhat of a new experience for everyone. That being said, we could not be more proud of the way the team represented our gym, coaches, and all the hard work that they have been putting in leading up to this competition.

First off, for those that don’t know, each competitor in weightlifting is grouped into a category based on their bodyweight. They then have 3 attempts at a snatch (make or miss) and 3 attempts at a clean and jerk (make or miss). An athlete (or their coach, assuming they have one) picks all of their own weights, but once the weight is loaded, they can not move back down. Their highest awarded snatch and highest awarded clean and jerk are added together for a combined total. This is their score. I say “awarded” because there are technical standards that a lifter must meet when in competition. There is a panel of three referees judging every lift making sure it meets these technical standards. Now, here are some [not so] Cliff’s notes on what went down this weekend:

Paivy was the first up. She competed in the 53kg weight class which weighed in at 7:00am so it was an early morning for her. She has been making great strides in her training leading up to this event. She smoked her snatch opener at 43kg, we bumped to 47kg which she missed on her second attempt (from nerves more than anything else), but she came back and made 47 on her third snatch attempt. For clean and jerk, we opened her at 61kg (easy), second at 65kg (even easier), third at 70kg which she missed the jerk. She took 4th place out of 6 in her class, 3rd in snatch, and went 4 for 6 in her first meet ever.

Next on deck was Eduardo. He competed in the 69kg category, weighed in at 9:00am and lifted at 11:00am. The funny thing about Eduardo is he was about 2kg overweight the week of the competition, but he is also the most shredded of anyone in the gym, so we had to sweat out about 4 pounds in 6 days (which is hard when you have negative body fat). We had his snatch opener set to 85kg, which we bumped up to 90kg after the way he was looking during warm up. 90 went up easy, so we moved to 95kg for his second. He had a minor technical error for a miss at 95, so we moved to 100kg which he missed out front. We came back strong on clean and jerks with 110, 115, and 120 — all makes. He finished with a bronze medal in the 69kg class, tied his lifetime clean and jerk PR, and his 210kg total was more than enough to qualify him for University Nationals. He was 6kg away from the American Open qualifier, so he will be competing again to qualify for a second national meet.

This was John’s first meet since he suffered a back spasm at the later part of 2014. It took him away from training for about 2-3 months and he has been slowly making his way back for about 4 weeks leading up to the meet. We stayed pretty conservative with his numbers so he could get the platform time and have a little fun without stressing over weights. He missed his opener at 65kg (out of nerves), made it on his second and took 71kg on his third snatch. CJ went 3 for 3 at 85kg, 89kg, and 94kg. He had a really good day considering the lack of training over the past few months!

Andrew had a great day in his first weightlifting meet ever. We could tell he was a bit anxious in the warm up room, so we gave him extra warm ups to settle his nerves. Despite being a little nervous, he went 6 for 6 on the day with snatches at 70kg, 74kg, and 76kg and clean & jerks at 85kg, 89kg, and 94kg. His movement and technique has come a long way in the past 4-5 months and his consistency really came through when it counted!

We pushed Rachel a little bit on her percentages because she was looking so good. Snatch she smoked 52kg and 55kg. I moved her to 58kg for her third, but then moved her to 60kg to buy her a little bit more rest. She had a narrow miss at 60 which would have been a 1kg PR. Soon! Clean and jerk we went 68kg for her first attempt no problem. We moved to 72kg for number 2 which then shuffled her almost 10 places back, so we had her take 70kg in the back room to stay warm. At this point, something happened and she started falling apart mentally. She missed the clean at 70 in the warm up room twice, took her 2nd attempt out front at 72 and missed the clean. At this point, I was doing everything I could think of to try to bring her back (which included me dancing in the back room to get her to laugh). So with a combination of me making a fool of myself and her getting a little bit angry, she powered through her third attempt at 72kg and made it look like an empty barbell. Rachel took 4th overall after a tough mental battle and will be competing again in 6 weeks in an attempt to post a qualifying total for University Nationals.

Liz had a great day at her first meet. We started conservatively, but she actually got pretty close to her personal records while going 6 for 6! Snatch we opened at an easy 41kg, moved to 45kg and ended at 50kg. Clean and jerk went 65kg, 69kg, and 72kg. Considering how nervous and anxious she was the night before, she really came out and crushed it!

Gen came out strong with her snatch opener at 54kg and second attempt at 57kg. We moved her to 60kg for her third, but also moved her shortly after to 62kg to give her a little bit more rest in the back. She barely missed 62kg which would have been a 1kg personal record and just a few kilos away from a bodyweight snatch. Clean and jerk opened with 67kg but was called “no lift” due to a slight press out. She moved to 70kg for her second and SMOKED IT, went to 74kg for her third attempt and got pinned in the bottom. She still came out with a bronze medal (tying with another competitor’s total, but winning with a lower bodyweight!). She’s made a lot of technical adjustments the past few months and they are really starting to take hold!

Pat was next up as our only 77kg male. He was looking really good warming up, so we opened a little bit higher than we entered. Pat opened snatch with 95kg, moved to 100kg, and then 105kg. Everything was looking so great, but he unfortunately got called out on 105kg for a slight press out. At this point, all he had to do was hit his opener on clean & jerk to qualify for University Nationals, so we opened at 120kg, smoked 125kg, and then I moved him to 128kg for his final attempt. He looked at me and said he wanted 132kg which would have given him the base qualifying total for the American Open. Since we already had Universities and it was his last lift, we put it on the bar and he made it. He ended 2nd place for snatch, 2nd place in clean & jerk, overall silver medal, and qualified for two national competitions at the end of 2015. Now the real work begins!

Meredith came next as our 75kg female. With her work and travel schedule, she was not on cycle to compete at 100%, so we had her take her training program percentages while gaining a little bit of platform time. She stayed around 80-85% on the day and opened snatch at 50kg, second at 54kg, and put her third lift at 57kg behind her. Clean and jerks went 66kg, 70kg, and her third at 72kg which was barely out front and decided not to chase it. Overall, she had fun, placed 3rd in the snatch, 2nd in the clean and jerk, took bronze overall and went 4 for 6 all at training percentages!

Our final session was the 85kg men which included Drew, Mike, and Jon.

Drew was up first with his snatch opener at 83kg. He made it look easy so we moved to 86kg. He got called for a press out on his second, and took it again on his third attempt with a slight press out. Clean and jerks were strong for him at a 110kg opener, 117kg second attempt, and then an off the wall jump to 131kg for his final and fun lift. He made the clean no problem, but was a little too tired to make the jerk. I know he was stressing a little bit about this meet, but we are so glad that you came out and had some fun because his lifting that day was the best we had ever seen!

Mike came out with numbers that could potentially qualify him for University Nationals as well. We wanted everyone to have fun, but that is always in the backs of our minds as coaches. We opened conservatively at 83kg which was a great make. We moved to 87kg which he got called for slight press outs on both second and third attempts. Clean and jerks were very strong for Mike. He opened 111kg, moved to 117kg for a narrow miss, and then we moved him to 120kg for a PR match and he absolutely smoked it. He was a few kilos off of the University qualifier, but he will be competing again very soon.

Jon came out with his game face on. We pushed him a little higher on his lifts because he was in a different place that day. I think he said one thing during the entire warm up which was something super deep and zen that blew Mike’s mind. Anyway, we opened him at 88kg on snatch, then 92kg, and ended him at 96kg for a 3 for 3 snatch performance ending above 95%. Clean and jerks went 115kg, 120kg, and 125kg just under his current PR. Overall, he placed 4th only 4kg behind 3rd place and really brought out his inner competitor.

We entered both our men’s team and women’s team in the team categories. Based on where our individuals placed in their respective weight classes, they would acquire a certain number of points. 1st place = 10 points, 2nd = 9 points, etc.

So, there it is. Two days, twelve lifters, seven sessions, 5 medals, 3 six-for-six performances, 3 national qualifiers, 2 team plaques, and a lot of fun! We are so proud of everyone who competed, your great attitudes, and your level of professionalism. We couldn’t ask for better athletes to represent our gym.