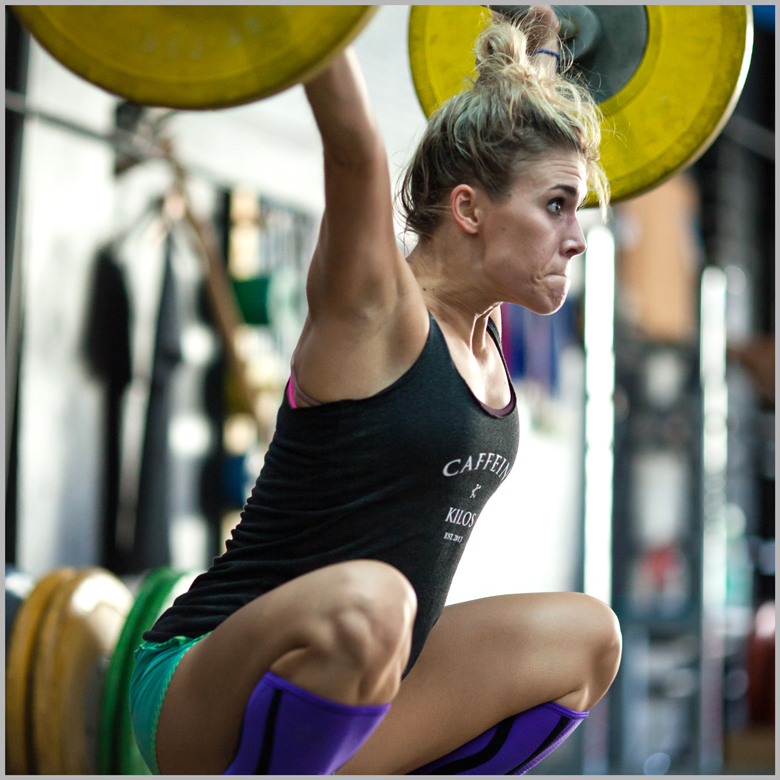 The snatch: we either love it or hate it…or love to hate it. It’s the most technically difficult lift ever conceived and it can take a lifetime to master. Don’t sweat it though, to keep you in the consistency game, we’ll hit you with some tips and tricks to combat these 5 most common errors and keep your snatch looking pretty every time.

1) Inconsistent starting positions.
When it comes to weightlifting, you’ll always hear me say that consistency is key. This goes for not only the start position, but every portion of the lift itself. Before you even start your first pull, your set up needs to be correct (note: a “correct” set up is relative to the individual and will probably vary from lifter to lifter). The set-up, or start position, determines whether or not you will have an effective first pull, which then determines whether or not you achieve proper positions up to the hip, etc, etc. Mistakes that stem from the bottom of the lift tend to roll uphill.

THE FIX: This sounds like an easy one, but take a moment before each lift to set up properly. I discourage touch-and-go lifts for this very reason. Set up, tighten up, then pull!

2) Yanking the barbell off the ground.
This is something that I see quite often, especially in some of the stronger, but less trained, lifters out there. When people rely on brute strength alone to put a snatch overhead, you’ll see a hard yank off the ground to try to generate as much speed as possible right from the start. Not only is this hard on your spine, but it also yanks you out of position for the entire lift. Think of driving a manual car — if you ease the clutch out and give it a little gas, you get a smooth start with smooth acceleration. If you floor it and pop the clutch, well…let’s just say that there’s only so much tread on the tires.

THE FIX: Learning to break the bar off the ground gently is the priority. I’m not saying GO SLOW, but it must be controlled. Start by doing paused snatches…Pause at the knee on the way up, and then complete the lift. This will teach you to control the bar to your knee, but once that’s over, start easing the bar off the ground and accelerating! Two speeds (slow to knee, fast to hip – if you’ve ever heard that) won’t cut it. Speed builds to the top of the lift — it doesn’t start immediately from the bottom.

3) Using too much hips and not enough legs.
We all know the sound it makes when someone’s hips slam into a bar. It sounds awesome, right? Even though the hips are making contact with the bar at extension, that doesn’t mean that one should be throwing their hips forward and through the bar. Think of the snatch as just standing up really hard with weight in your hand. Now, if you were sitting in a chair and I asked you to stand up, I’d bet money that you wouldn’t stand up by dropping your shoulders back and pushing your hips forward. You’d stand straight up using your legs. At the top of your second pull, you should be pushing straight through the ground with your legs…as hard as you can. This produces much more vertical force on the bar (which is what we’re after) instead of horizontal force from throwing the hip.

4) Power snatching all the time.
First off, there is nothing wrong with power snatching when it serves a specific purpose. When someone is new to the lifts or has a desire to learn how to snatch correctly, the power snatch should be used sparingly. If done too often, it will train the body to stand up and then stop. Nine times out of ten, if someone is power snatching on the reg, it’s because they aren’t comfortable with an overhead squat. Being successful in the snatch dictates that one should be ridiculously comfortable with the OHS. If you’re not, then it’s time to start.

THE FIX: If you’re a power snatcher, add an overhead squat to every lift (Power Snatch + OHS). Try to work your receiving position lower and lower over time until it starts to become second nature to receive a snatch in the bottom of an overhead squat. Also, working on drop snatches and overhead squats will gain you more familiarity with the bottom position. I generally prescribe drop snatches at 50-60% of your 1RM snatch and OHS around 55% of your 1RM snatch. Yes, that’s supposed to be light — It’s not about the weight, it’s about training the position.

Side note: A power snatch denotes receiving the barbell in a snatch position with the hip joint higher than the knees, or above parallel, to keep it simple. Power snatch doesn’t mean you have to receive the lift standing straight up. In fact, I tell everyone to try to receive the lift either right above or right at parallel when they get started. This will train good skill development and transfer over when performing the full lift. The snatch and the power snatch are the exact same thing; the only difference is that you stop above parallel in a power.

5) Pulling the bar up instead of pulling your body down.
We’ve hit the first pull and talked about the top of the second pull, so how about that third pull? Don’t get so concerned with getting the bar as high as you can that you forget about pulling yourself underneath. Snatching isn’t about launching the bar in the air and hoping that you’re in the right place to catch it. You have to put yourself in the right place and receive it. The arms play almost no role whatsoever in creating elevation on the barbell. That is all done with the big leg and hip muscles that we work so hard for. The arms come into play after the legs are done to direct and pull the body downward to be in a good receiving position before the bar changes direction.

THE FIX:  I like tall snatches, drop snatches, snatches from the power position, or even from the hang or off blocks. I often tell people to pull themselves down and miss intentionally to get the fear of missing out of the way. It’s all about comfort and confidence and once you realize that the worst thing that can happen is that you miss the lift, you’ll start to really attack the lift aggressively.